After five years of planning and construction, the Northwest Arkansas Trailblazers have opened the second phase of the Little Sugar trail system to mountain bikers, hikers, and trail runners. The 25-mile Tunnel Vision loop combined with 14 miles of trail that opened in December adds up to nearly 40 miles of soft-surface riding on the west side of Bella Vista with more to come by the end of the year. The trail system gets its name from Little Sugar Creek, which skirts the eastern boundary of the Tunnel Vision trail before the route plunges riders into the hollers and ravines native to the Ozarks.

Arkansas-based Rogue Trails and Michigan-based Rock Solid Trail Contracting both worked on the trail system. The reason for that is twofold, said Uriah Nazario, the soft-surface project coordinator for the NWA Trailblazers. Two trail building companies working on the system at once sped up the huge endeavor and, from a rider’s perspective, created two different trail experiences. The trail work was split down Highway 340 with Rogue building to the north and Rock Solid to the south.

“Rock Solid builds wider, undulating trails with big berms that make for a fast-paced ride if you have the gall to let go of the brakes,” Nazario said. “While Rogue’s trail builders have a penchant for weaving scenery and natural features into their work.”

And of course, keep your eyes peeled for optional features, like jumps, drops, and wooden skinnies, that both crews have generously sprinkled up and down the trails. You should also be prepared to stop and take in the scenery surrounding Little Sugar Creek, which the trail builders have opened up to exploration. The trail skirts exposed bluffs draped in dangling greenery that creates small waterfalls in the rainy spring, which, by the way, doesn’t stop this trail system from being rideable or walkable. You’ll also want to make a trek out to Tanyard Creek Falls, which cascades down massive boulders from Lake Windsor. Between those sights, you’ll find plenty of other nooks and crannies that will make you forget you’re just an Uber call away from your home or car in the event of a flat tire. And riders, be ready to use those climbing legs, too. The descents are a roller coaster, but you have to earn them. 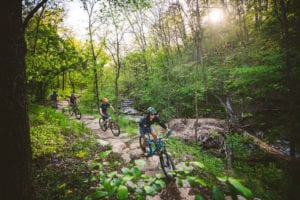 “Little Sugar averages 1,500 feet of ascent in about 10 miles,” Nazario said. “But both the climbs and descents are elongated and built with maintaining momentum in mind.”

Although you will run into multiple water and road crossings, there are bridges and tunnels built out of 10-foot diameter pipes that make for a seamless and safe ride. The NWA Trailblazers are also overseeing the construction of a nearly 400-foot bridge spanning Little Sugar Creek that will serve as a connector to the Back 40 trail system on the east side of Bella Vista, which opened in 2016. Once that’s complete, mountain bikers will be able to start and finish a century ride, that’s 100 miles, all within city limits and almost entirely on the soft-surface trail. Like the Back 40 trail system, which consists of an outer loop with additional miles of trails crisscrossing the interior, the third phase of construction on the Little Sugar trail network will create the same kind of scenario. That phase includes a technical trail that is being built by another Arkansas-based trail building company, Jagged Axe Trail Designs.

“Although we’ve had a multitude of setbacks, we have saved some of the best for last,” Nazario said. “I expect trail users to return to new trails and features that will continue to blow their minds.”

Until then, riders can get plenty of miles in on the Tunnel Vision loop, as well as the Land Line, Tweety Bird Loop, and Down Under Loop trails that are now officially open to all users. Parking and trailheads can be found at Lake Windsor, the intersection of Chelsea Road and Prescot Road, the water tower near the intersection of Chelsea Road and London Drive, Riordan Hall, Scotsdale Golf Course, Bella Vista Assembly of God church, and across the street from the Bella Vista Funeral Home on Forest Hills Boulevard.